Discussion – Do We Have Free Will? 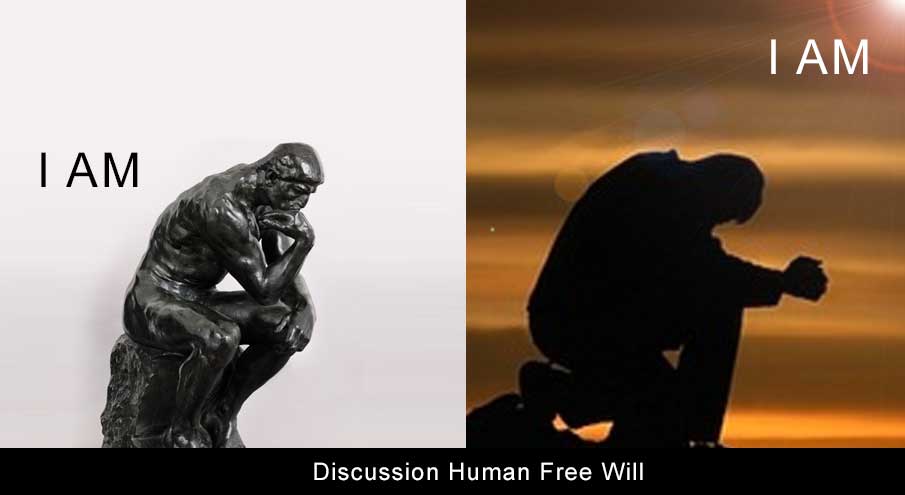 What is Free Will?

Do we as humans have free will (why or why not)?

What is free will?
Definition of Free: Not under the control or in the power of another; able to act or be done as one wishes. Not physically restrained, obstructed, or fixed; unimpeded.
Definition of Will: The Will plays a central role in enabling a person to act deliberately. The Will, generally, is that faculty of the mind which selects, at the moment of decision, from among the various thoughts or desires present. Will does not refer to any particular thought or desire, but rather to the capacity to act decisively on one’s thoughts or desires. The expression of intent or Intentionality.
Definition of “Free-Will: The ability to choose, think, and act voluntarily. For many, to be the sole source and author of their own actions and to reject the idea that human actions are determined by external forces. conditions or fate.
The above definitions are not terrible, perhaps not perfect, but will do to provide a basis for discussion. So the next question is:

Do we as humans have free will (why or why not)?

Do we have a free Will?

I am going to attempt to answer that by breaking it down into two questions:

Do we each have a will?

And is it free?

So what does the bible have to say about us having a Will? Here are two places which I believe give us clear insight into this.

Matthew 26:39 Going a little farther, he fell with his face to the ground and prayed, “My Father, if it is possible, may this cup be taken from me. Yet not as I will, but as you will.”

Matthew 6:9&10 – “This, then, is how you should pray: “‘Our Father in heaven, hallowed be your name, 10 your kingdom come, your will be done, on earth as it is in heaven.
In both of these passages, I believe it is clear that there is a distinction between the existence of God’s will verses the individual’s Will such as Jesus’ Will or a blanket statement in regards to all human kind on the earth as stated in the prayer. the idea in both of these passages is a surrender of the person’s Will to God’s Will.

Did Jesus love us and want to save us? Yes.

Did he want to go to the cross and suffer and die the way he did and have the sins of the world put upon him? No, he did not want that and that is why he prayed to the Father and pleaded with him to the point of drops of blood formed from the intensity of the prayer. IF there was any other way, “My Father, if it is possible, may this cup be taken from me”, and the Father’s answer was clear that there was no other way for forgiveness to be obtained unless there was a sacrifice made. And even though it was Jesus’ Will not to want to go through the cross, he surrendered His will and accepted the Will of the Father.
So Jesus surrendered His Will to the Father’s Will and endured the cross, willingly he gave his life to pay the ransom, and did so out of love for us and showing us this by asking the Father to forgive those who were crucifying Him. This is why Paul says in 1 Corinthians 6: 19&20: Do you not know that your bodies are temples of the Holy Spirit, who is in you, whom you have received from God? You are not your own; 20 you were bought at a price. Therefore honor God with your bodies.

For us to pray that God’s will be done on earth as it is in heaven, denotes an acknowledgement that God’s will is not being done on earth as it is in heaven. If this is true, then who’s will is being carried out on earth? Many would argue it is Satan’s Will as spoken of in Ephesians 2:2 As for you, you were dead in your transgressions and sins, 2 in which you used to live when you followed the ways of this world and of the ruler of the kingdom of the air, the spirit who is now at work in those who are disobedient.

And as we read verse Ephesians 2:3 also, we see that we all exercised our own Will and chose to sin – 3 All of us also lived among them at one time, gratifying the cravings of our flesh and following its desires and thoughts. Like the rest, we were by nature deserving of wrath.

So the Bible does in fact bear out the reality that there are wills that exist, but they only exist within the confines of God’s sovereign Will. As such, I think we have to acknowledge that we do have a will, which means we can in fact make choices.

So… Do we each have a will?

The answer is yes

And is it free?

Ah now this is where… as the saying goes, the plot thickens…

Do we each have a will? The answer is yes and we have noted that it is possible for people to exercise their will in a way that is opposed to God’s Will.

Now we ask the second part of the question. We have a will but is it free?

I am going to come right out of the gate and say that as created beings, we have never, nor is it possible to be absolutely free. If we accept the definition of free to be:

“Not under the control or in the power of another; able to act or be done as one wishes without condition. Not restrained, obstructed, or fixed; unimpeded physically, emotionally. intellectually, spiritually and morally.

Only God himself can be absolutely free. Only He is all-powerful, who can stay His hand? Only He is not restrained, obstructed, or fixed; unimpeded physically, emotionally. intellectually, spiritually and morally except by HIS OWN WILL.

Therefore God is truly the only one who has a Will and who is truly Free. So to cut to the chase and spare you countless posts, I will simply say that only God has “Free Will”.
For those who want to follow along into the logical discourse, please continue reading.

So if God only has “Free Will”. What does that imply to angels and humans alike? For the Bible teaches us that both have wills. It implies that we do not have absolute free wills, but that we do have wills and have been given “some” freedom in which to use them. In other words, created beings are created under authority and with conditions. It is also important to note that if the measure of “free” means to the degree one has freedom in which to express that freedom, then it is directly linked to any authority or control over us. Because of this, the level of our freedom is not fixed, but has changed and is changing.

Yep. When Adam and Eve were created, before sin, the level of freedom was at its peak the best it could possibly be for created beings. There was literally only one thing, one condition God required of them to obey and acknowledge God’s Will for their lives. When they were deceived and by their own “will” chose to oppose God’s Will, they sinned. As a result of this we know man came under the power of sin and death as a consequence of that choice. We also know that all of Adam’s descendants would forever inherit a sinful nature. And so we see there was a change in the state of being when sin entered into the picture.
When God gave the Law, things changed again. Form that time forward all mankind would be “under” God’s Law. in Ephesians 4:4&5 we learn even Christ was born “Under” the Law.
4 But when the set time had fully come, God sent his Son, born of a woman, born under the law, 5 to redeem those under the law, that we might receive adoption to sonship.
And so up until Christ had come and the work of the Gospel was complete, mankind was “under” sin, death and the Law.

Now when the Gospel was completed and Pentecost marked the visual coming of the Holy Spirit as promised by Jesus, again the level of freedom changes. That through the power of the Holy Spirit we could exercise our will to choose to live by the Spirit rather than by the sinful nature (Rom Chapter 7, Gal Chapters 5&6). And in this state we have a “freed” will. We become free in Christ. However, for this to happen, we are placing ourselves “Under” the blood of Christ and thus we are bought by a price. We are not our own.

Lastly we know that at the great white throne, Jesus throws sin and death into the eternal fire and those who enter into God’s eternal glory, sin and death no longer will exist and we will no longer be temped or war against a sinful nature. So again the state of being free will change.

Again, being free means “Not under the control or in the power of another; able to act or be done as one wishes without condition. Not restrained, obstructed, or fixed; unimpeded physically, emotionally. intellectually, spiritually and morally.”

Neither Mankind or Angel kind was ever created truly free, for all created being will always be “under” the authority of God, the great I AM.

You are either a salve to your sinful nature or you are a slave to God through Jesus Christ. There is no middle ground, and yet we live in the reality of daily sanctification where day by day we walk in freedom in Christ.

Galatians 5:1 It is for freedom that Christ has set us free. Stand firm, then, and do not let yourselves be burdened again by a yoke of slavery.
To seek first the Kingdom of God and His righteousness is a decision of the the will. To love God with all your heart, soul, mind and strength and to love your neighbor as yourself is a decision of the will. And Christ said that those who “obey” are the ones who love Him. The decision of the “will” that is to be made by each of us, is the same decision Jesus made in Phil 2:6-8

6 Who, being in very nature God,
did not consider equality with God something to be used to his own advantage;
7 rather, he made himself nothing
by taking the very nature of a servant,
being made in human likeness.
8 And being found in appearance as a man,
he humbled himself
by becoming obedient to death—
even death on a cross!

Just as Jesus humbled himself and put himself “under” God’s Will, the Law, so now we too must humble ourselves and put ourselves “under” the new covenant in Christ.
Are we then Free? No, we are freed from something to something else. Rescued from the bondage of sin and death, to a bond servant of Jesus Christ. And He calls to us all:

Matthew 11:28-30
“Come to me, all you who are weary and burdened, and I will give you rest. Take my yoke upon you and learn from me, for I am gentle and humble in heart, and you will find rest for your souls. For my yoke is easy and my burden is light.”

By Him and for Him,
God Bless

One thought on “Discussion – Do We Have Free Will?”